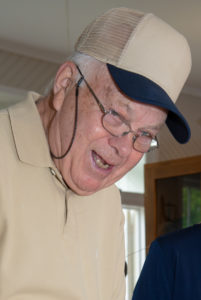 The Portland District and Area Heritage Society, which manages the South Frontenac Museum, met on Wednesday, November 14, 2018 in the Sydenham Library meeting room.  This post describes highlights from the presentation by Ed Asselstine, the guest speaker at the meeting.

Ed has lived his whole life in the Verona area. Over the years Ed has helped run the Verona Festival, the Antique Car Show, and many other local events.

Ed was born in 1934 on Desert Lake Road and lived there until 1939 when his family moved to Sand Road. Later, his parents ran the hotel in Verona. There weren’t a lot of organized activities for kids in those days, so they made their own fun. Some games, like rolling a tire down the road with a small boy tucked inside, can only be imagined today. (Ed was one of the smaller boys, so he dreaded that game.) Other activities included swimming, fishing, and skating or hockey on Rock Lake.

Ed started school in 1940 in a two-room schoolhouse on Sand Road. His teacher was Jenny (Card) Ball. Because Jenny lived next door to Ed’s family, there were no secrets. In 1941 or ’42, his teacher was Bessie (Card) Meeks, Jenny’s sister.

In 1945 and ’46 the soldiers started coming home from overseas, including the Revell and Orser boys. The other highlight of that year for Ed was that the auto manufacturers started building cars again for the first time since 1942. As a result, by 1945 there were three car dealerships in Verona: Revell Ford, Harry Wilkins’ Dodge and Desoto across from Walker’s Store, and K&G Reynolds GM dealership (K&G stood for Keith and George).

Keith had actually sold and moved his house and then built the dealership on the lot on the main street. The house had been moved by raw manpower, not machines.  Ed remembered Truman Ball’s jewelry store across from the garage; Truman had a brand new 1941 dark green Chevy which the boys were occasionally allowed to look at up close, so long as Charlie Stewart was there to supervise.

The railway played a big role in the village, with two trains running north and two returning south each day. There were two churches in town: the Free Methodist Church and Verona United Church (now Trinity). To supplement the religious training, Mrs. Tallen, an elderly lady who loved children, would lead bible lessons for kids who had dropped in to warm up on a cold day.

1950 brought some newsworthy changes to Verona with the paving of the road (within town limits) and new sidewalks. At one point, a sink-hole swallowed part of the road near Muddy Water’s restaurant closing the road for weeks, and required many loads of sand to fill it up and stabilize the road. Apparently, one can still see mounds of sand where this fill floated up and settled beside the road.

Ed loved his cars, and owned several over the years, including a ’31 Ford Model A Roadster, a ’41 Chevy convertible, a ’28 Duran Roadster that was eventually sold to someone in Switzerland, and a ’66 Ford Mustang that is now in Paris France. 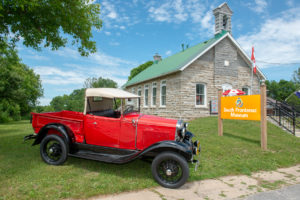 Ed then showed some photos from the past, including a set of images that his father-in-law Murray McMahon had taken to Europe and back during World War II.

We are grateful to Ed for giving us this delightful and thought-provoking glimpse into our local history.

8 thoughts on “Ed Asselstine Reminisces About Years Past”