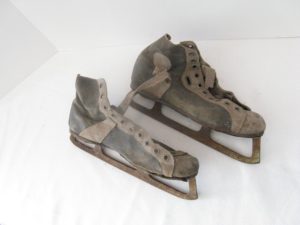 The Doors Open event last June inspired a chain of events that continues to shed light on a piece of local history.

Glenn Snook heard about the event and brought in an old pair of skates that had passed from his great-aunt to his grandmother and grandfather and eventually to him.  Glenn donated the skates to the museum.

Craig Bakay wrote about Glenn and the skates in the Frontenac News on June 21, 2018:

‘ “These belonged to Carolyn Fluke in the 1890s,” Snook said. “Some people might know Robin Fluke, a relative who was a teacher at Sydenham High School.”

On Dec. 24, a 20-something Carolyn decided to go for a skate on Lake Opinicon.

Unfortunately, the ice was thin. She fell in the water. She drowned.’ 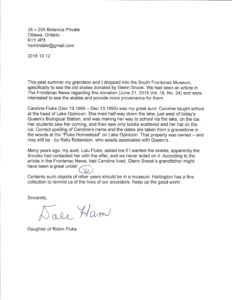 Dale Ham read this article and visited the museum later this summer with her grandson.  Then in October, she wrote a great letter (attached with permission) filling in a bit more of the story of the skates, and providing the correct spelling of Caroline Fluke’s name.

Thanks to Glenn, Dale, and everyone involved for helping to connect us with our history!