The Portland District and Area Heritage Society, which manages the South Frontenac Museum, met on Friday, January 18 at Trinity United Church in Verona. This post describes highlights from the presentation by the guest speakers at the meeting, Phil Leonard and Dale Sigsworth.

The Sigsworths were from Yorkshire England and sailed to Canada in 1870. They bought 100 acres at Lot 9, Concession 7, Portland Township, on the north side of Petworth Road. Later, the family bought Lot 9, Concession 8 on Boyce Road, which had a stone house where Dale was raised. The first house on the property had been a log house, built in 1819. Dale showed the group a large rock from the foundation of the original house.

Eventually, there were enough Sigsworths in the area that the flag stop railway station on the northwest corner of Petworth Road and the K&P Railway was named Sigsworth Station. Since this station was only a mile from the main station, it was used mainly for shipping grain.

Much of the land in these townships was given by the Crown to the United Empire Loyalists and their families for service during the American Revolutionary War. William Ruttan, a Loyalist Lieutenant was an original owner of the Sigsworth property. Other names that were around in the early days include the Sauls, who were stonemasons like the Sigsworths. 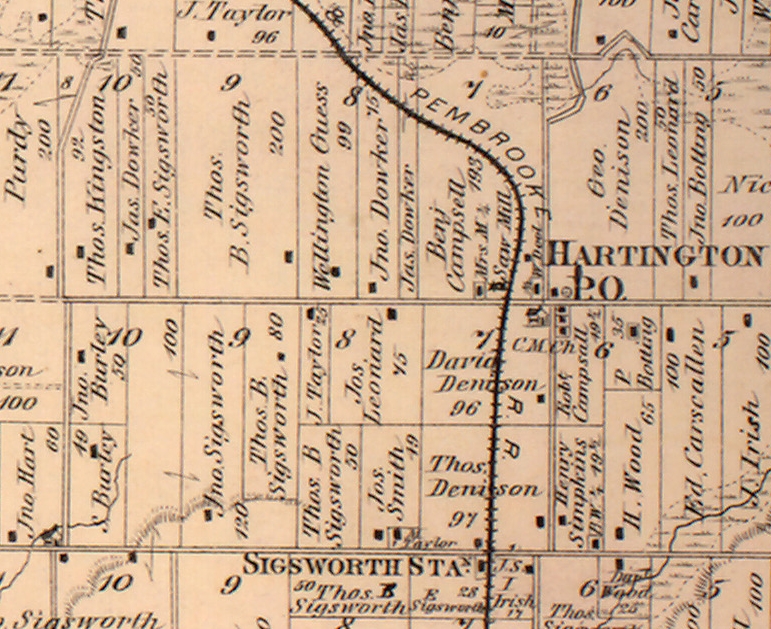 Phil Leonard’s oldest grandfather’s name was Joseph. He built a small house and then later the next year moved to the Boyce Road. Phil’s grandmother Nettie remembers when they built a 16 by 16 foot log house on the homestead, and they could see the stars through the roof at night. They used bits of hay or straw to fill the gaps.

There was not a lot of money in the early days. To pay their taxes, the families would fill in the ruts on the road to work off part of the tax bill.

Things were less expensive, though: Phil showed a postcard that had been sent from Queen’s University to Phil’s grandmother in 1900. The stamp was one cent.

Phil’s father used to keep silver foxes and his grandfather would grind food for them. Once, his dad bought an old horse for $5.00 on Wolfe Island, brought it home, and hit it over the head to grind up for the foxes. Later they sold two female foxes and one male to a gentleman on Wolfe Island for $1,000.00(!).

There were so many woodchucks on the land that Leonards used to pay a bounty of ten cents a woodchuck for shooting them.

In 1905 there was a barn-raising at the Leonard homestead. It took two years to get the huge pine beams ready, and tamarack was used for the rafters. The steel roof on the barn was paid for by trapping muskrats and selling them for $5.00 each.

The Leonards planted potatoes at the farm and stored them covered with hay to keep them from freezing. The trek to market was six or seven hours by horse and sleigh, so they had to start out in the middle of the night, and would heat up bricks ahead of time to keep the potatoes from freezing on the trip. Later, when the railway was put through, the trip was much easier.

In 1938 there was no bridge in Hardwood Creek and the bay on Silver Lake (now called Hambly Lake) was called ‘Devil’s Den’ because it seemed bottomless. Truckload after truckload of rock and fill were poured into the bay until the swamp solidified enough to build on.

The Kingston Swamp caused other problems around Highway 38 between Boyce Road and the Foodland. When the K&P railway was built, part of it collapsed and the train sunk into the quicksand, but they were able to retrieve the train. In more recent years, the restaurant that is now Muddy Waters had the similar problems with the quicksand. Many, many long piles were driven into the ground to provide a solid foundation.

Dale told a story of a man named Burt Charlton who spent the summer in one of the Sigsworth’s barns. Burt would do some work for the family and they came to know him quite well. He had been a sniper during the war, received an army pension, and would spend his pension on booze or drink home-made beefiron wine. When he was drinking, he would be out for two or three days and he would live off the land, sometimes taking food from people’s gardens.

During the war, Burt would sit on the church steeples and pick off the German troops behind their lines. Back home on Sigsworth’s farm, he would climb up on the barn roof with his rifle and telescopic sight and hit the bull’s eye on an oilcan far away on the ground. Whenever someone would challenge him to a shooting contest, he would easily win.

Today, Hartington is only a crossroads, but in 1943 it had three stores, a railway station, and a cheese factory where the locals bought “rubber curd.” In 1947, the cheese factory was struck by lightning and burned down. You can’t find rubber curd like that any more.

Thanks very much to Phil and Dale for sharing their memories with us, and to Irene Bauder for taking the notes which were used to write this article.