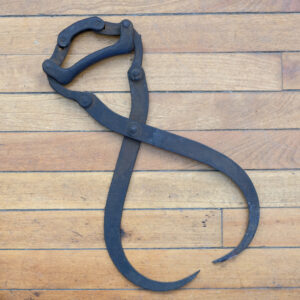 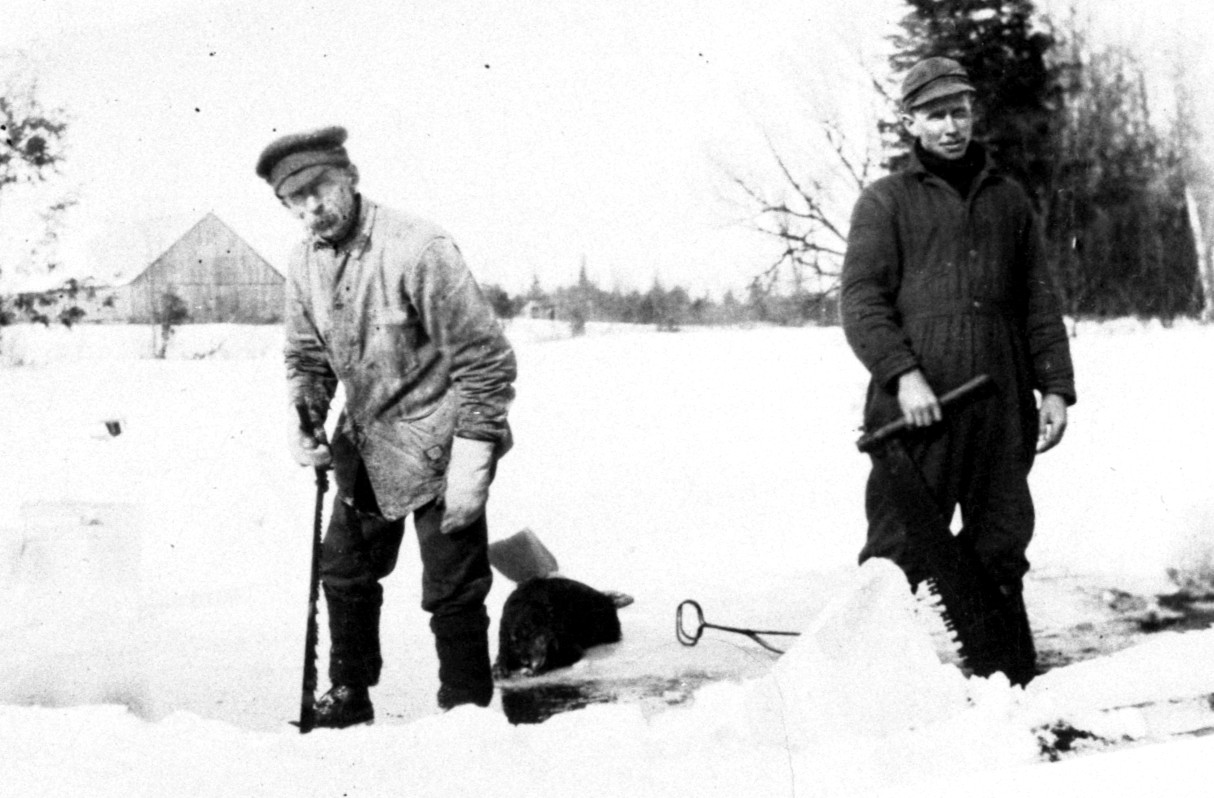 Thinking of those hot summer days?

In the 19th century, and beginning of the 20th century, these thoughts would be on the minds of local people who had to prepare for more than just a cold drink. Since the primary method of refrigeration came from ice cut from lakes, time and labour would have to be spent out in the winter cold.

In Frontenac, before electricity was brought to our homes and farms, everyone had an icehouse on their property or an icebox in their kitchen.  Cutting ice on our lakes was done in the dead of winter. Horses pulled scrapers across the lake surface to remove snow and smooth the ice. Then it was marked and scored into blocks before cutting. These blocks were sawn by hand, lifted from the lake with tongs, and placed on horse drawn sleighs to transport to the icehouse for storage. The ice blocks were covered with sawdust in order to stay frozen in warm weather. The sawdust was a by-product of milling timbers in local sawmills. Some icehouses were heavily walled stone structures set into the north side of a hill. Some were frame buildings within a building well-insulated with sawdust, wood shavings or hay. Local children were known to sneak into the icehouse on a hot summer day and lay on top of the ice.

Ice harvesting became an industry in the 1870s with large operations like the Sarjeant Company on Lake Simcoe. The ice there was considered of high quality. Railways along the shoreline made shipping more economical for moving ice quickly to distant markets. Some of this ice was brought to Kingston by rail from these large operations.

Large quantities of the ice was delivered as far away as the eastern seaboard of the United States, down to the Carolinas and Florida. Up to 40 per cent of the ice was lost to melting before reaching its destination. Special insulated railcars were built to transport the ice. Other railcars called "reefers" were used to carry perishable goods such as meat and vegetables. These reefers had several designs to refrigerate including one method using salt and ice.

Blocks harvested by these large operations could measure 22 by 32 inches, weighing between 50 and 300 pounds. They were floated to shore via channels cut in the ice, then deposited by conveyor belt to icehouses and waiting railcars. Up to a foot thick layer of sawdust insulated the ice. Larger ice operations were mechanized, with saws driven by steam and then gas engines. At its peak, the ice industry was controlled by a conglomeration of ice companies known as the Ice Union which dominated international sales.

Still small suppliers fulfilled local needs. Frontenac harvesters would deliver ice by wagon to area villages and to Kingston. The iceman would come to homes and businesses unloading blocks of ice into waiting iceboxes. The ice tongs pictured here from the South Frontenac Museum collection would have been used by the iceman on his delivery runs. It was designed by William Louden of Fairfield Iowa, Patent 576,461 issued Feb. 2, 1897.

By the early 1920s, artificial ice started to slowly supplant natural ice and ice making factories were built. Iceboxes also would become a thing of the past with the advent of refrigerators.