Written by: Sam Nicholls - Connect with Sam at sam13nicholls@gmail.com 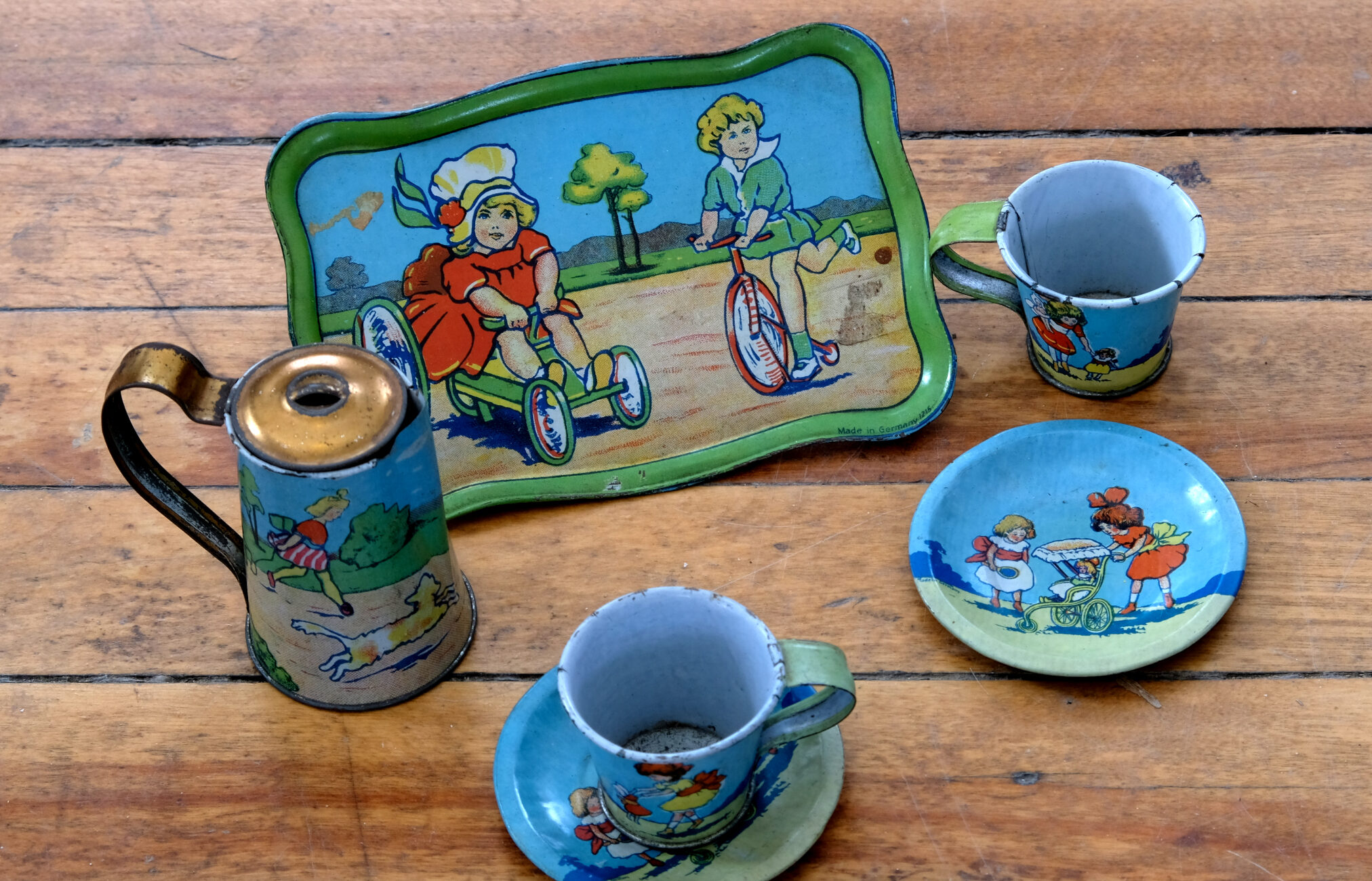 A common toy in modern and historic households is the tea set. This particular tea set is made of tin and was manufactured and marketed by the Ohio Art Company that produced colourful tea sets and drums after World War 1.   It was not uncommon to see other traditional sets made of porcelain or ceramic and today, children’s tea sets are predominantly made from plastic.

The introduction of the tea set as a popular toy for young girls emerged as early as the 16th century (1500s), although the material they were made from varied. Previously seen in European countries such as France and Germany, the tea sets’ rise in popularity came in the 19th century (1800s) in places such as Europe, Britain and the newly established North American colonies. Wealthier families gifted daughters delicate and decorated tea sets on birthdays and holidays, encouraging these young girls to hold tea parties for dollies, teddy bears and friends.

Afternoon tea (also known as High Tea) is now a long-standing tradition in Britain. Its establishment is credited to Anna, the Seventh Duchess of Bedford (England), in the year 1840. As Britain began to establish colonies in Canada, this tradition continued within colonial settlements because of its recall and relationship to England, the original home of colonizers. Gifting a tea set not only instilled a sense of pride and connection to England; it also prepared young girls for their upcoming roll as a woman in Canadian society.

Hosting a pretend tea for their dolls and friends allowed daughters to prepare themselves for domestic life. As part of their role as the housewife, adult women would host tea’s for other local women. In wealthier and urban communities, afternoon tea was an event in which ladies of the town would be invited to and was an opportunity to dress up and exhibit delicate and refined manners. In more rural communities, afternoon tea was a little less formal, but nonetheless a significant event that would allow women to take a break from their domestic chores and engage with other women in their communities.

Gifting a young girl a tea set was a marker of the role she would take on in society. It would allow her to engage in imaginative play, while teaching her the responsibilities of motherhood and the entertaining of guests. The images featured on the tin tea set of the South Frontenac Museum also emphasize some of the roles a girl child would be expected to take on – caring for children through the play with a doll and sharing toys with other boys and girls, therefore emphasizing the care she has for her community.